Hello, Giantess fans! Exploring the world of little people today. Three inch little people that is! Where they came from, and playing with various dynamics you might encounter when a three inch man is standing on your counter! Fear and the Giantess goes hand in hand, to some extent, in any Giantess fantasy. That fear turns exhilarating if the Giantess is more benevolent and intriguing versus a stereotypical, capricious and destructive one. In this review, we are not looking at the fantasy of the woman growing into a Giantess.  In those fantasies it is making her larger than those around her.  In this review we are living in our regular sized world, and it’s the tiny man, or little person who was shrunk to his diminutive size. 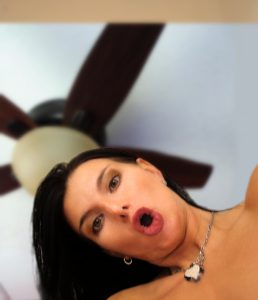 Oh! Are you one of those little people?

Recently a delightful fan and I did a role-play about a single woman accidentally coming upon a little person. Extremely well thought out filled with delightful nuances; we had a lot of fun!

Reasonably thought out, the little guy finds himself accidentally brought in from a storm, rolled up in the  morning paper. He had stumbled in, taking shelter from a wicked thunderstorm. Tossed this way and that, then suddenly exposed and looking up at a beautiful Giantess. She was softly clad in soft chemise nightgown, but she didn’t see him yet.

If he ran, jumped down that cord he might make it off the counter before she noticed him. Heart beating in his chest, blood rushing in his ears a gallant effort was put forth. But when you are three inches, running 24 inches is going to take a huge effort. Try as he might, he’s found out. Trembling, vulnerable and frightened was she going to hurt him? Be upset , he’s in her home? He didn’t mean to intrude, to be rude. It was all quite by accident!

The little guy finds himself swooped up. Softly but firmly her large soft hand scoops him up. Her palm against his backside, fingers wrapped firmly around him. Legs sticking out from her palm he kicks furiously, panicking she hears muffed yells to let him down, leave me alone! Aww, liddle one, shhh shhh it’s ok, I’m not going to hurt you. Oh little guy, don’t shhh shhh I wouldn’t hurt , shh shh. It seems this vulnerable creature is touching her, and she can understand his fear. Taking her time, allowing him time to calm down, realize she isn’t out to hurt him. He calms and her fingers unfold. and she peers down at him with a big smile on her face. She can’t believe what she looking at. Marveling at his perfect proportions. She has a thousand questions.

Where did you Come From

Reluctant still, her questions of who he is and where he came from, are met with tiny resistance. Was he from another planet where there were other little people? No. “Is there another world with more of you liddle peeple,” she’d coo? No answer. Her mind raced with this shrinking fantasy, or that. She just HAD to know!

This Giantess is mostly amused and definitely determined.  His tiny resistance amuses her and she  sets her sites on convincing this liddle guy he’s better off in her care. It’s a big scary world out there and although she’s only met him moments ago she couldn’t let anything happen to this liddle one, no she can’t.

Notice with this little people fantasy how the Giantess isn’t intentionally frighting in action or deed, but that power shift is obvious and immediate. The liddle guy is instantly vulnerable and he’s not all to pleased over it. Trying to run, hide and escape her hand.  Obviously new to his tiny size, as he thinks his screams and kicks will amount to something.

Giantess’s manner of speech changes. It’s if she’s talking to a pet, or other vulnerable creature not a full sized male. Certainly this liddle guy being newly tiny, feels and see’s himself as a grown man. What affect the talk? Is it soothing, irritating annoying for a man to be talked to like that?

How the Giantess, inadvertently reaffirms with every touch and talk that there’s really nothing he can do to resist. He might as well get busy getting happy because it seems he has no other choice!

Where does this story go? Well, that’s the sexy part! We’ll have to explore our ending.

We use cookies on our website to give you the most relevant experience by remembering your preferences and repeat visits. By clicking “Accept All”, you consent to the use of ALL the cookies. However, you may visit "Cookie Settings" to provide a controlled consent.
Cookie SettingsAccept All
Manage consent

This website uses cookies to improve your experience while you navigate through the website. Out of these, the cookies that are categorized as necessary are stored on your browser as they are essential for the working of basic functionalities of the website. We also use third-party cookies that help us analyze and understand how you use this website. These cookies will be stored in your browser only with your consent. You also have the option to opt-out of these cookies. But opting out of some of these cookies may affect your browsing experience.
Necessary Always Enabled
Necessary cookies are absolutely essential for the website to function properly. These cookies ensure basic functionalities and security features of the website, anonymously.
Functional
Functional cookies help to perform certain functionalities like sharing the content of the website on social media platforms, collect feedbacks, and other third-party features.
Performance
Performance cookies are used to understand and analyze the key performance indexes of the website which helps in delivering a better user experience for the visitors.
Analytics
Analytical cookies are used to understand how visitors interact with the website. These cookies help provide information on metrics the number of visitors, bounce rate, traffic source, etc.
Advertisement
Advertisement cookies are used to provide visitors with relevant ads and marketing campaigns. These cookies track visitors across websites and collect information to provide customized ads.
Others
Other uncategorized cookies are those that are being analyzed and have not been classified into a category as yet.
SAVE & ACCEPT